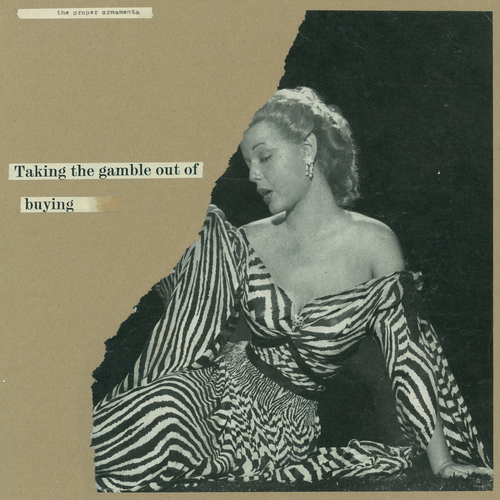 The Proper Ornaments make a thrillingly taut and melodic pop indebted both to the sun balm'd West Coast (the Byrds, Brian Wilson) and the driving, terse rhythms of the British Invasion and C86 pop (the Beatles, Postcard Records), centered around the close partnership of frontmen Max Clapps and James Hoare.

Their first contact was in 2005 in a West London womens' vintage clothing store when Max was used a decoy by his then girlfriend to distract shopworker James whilst she stole accessories. Following his subsequent apprehension they found themselves arrested with a mutual appreciation of the Velvet Underground and sixties psychedelia. They
duly started writing songs together only for years of depression and intoxication to follow; over this period the two bought their own tape machine, James became homeless and Max's wife filed for divorce.

Despite, or perhaps because of, these the duo repaired burnt bridges with former drummer Ralph Phillips in 2010 to begin playing shows, adding bassist Michael Lovett and Lets Wrestle frontman Wesley Patrick Gonzalez in 2010. They then worked with distinguished young producer Charlie Alex March to release a 7" on San Francisco label Make A Mess Records. Cult London indie label No Pain In Pop - who had released an early single with James' other musical project, Veronica Falls - got in touch after a gig and had the band record their debut EP over a two day period.

The eponymously titled product of these sessions is an abrupt and glorious slice of perfect pop. Jet propelled by super compressed drum production and the pair's DNA tight vocal interplay, highlights 'You Thought' and 'Drop Off' are maudlinly effervescent whilst the 89 bittersweet seconds of 'You Still' are as bleak yet consumptive as they come. Floating between the pair's rich voices not a word of the EP's lyrics is carried alone. All signs suggest, now with one spectacular release under their belts, it'll take more than a few high notes to tear Max and James away from each other.